The church was built in 1874 and is situated in the centre of the village of Radford Semele. From around 1850, services were held in a tiny thatched cottage adjacent to the Crown Inn, which stood where our church is today. It was after the Crown Inn closed down that Thomas Thorne, who was then the manager of the Leamington Priors Bank, purchased the land and demolished the pub to make way for the new church building. A devoted Christian, Mr Thorne laid the foundation stone himself in 1874. The stone is still visible today on the front wall of the church. Built by ‘Gascoyne of Leamington’, the church was erected for the princely sum of £1,500! This included the very best craftsmanship and woodwork.

1866 - 1882 - Thomas Thorne, who had the vision for a Baptist Church in Radford Semele, acted as Pastor. A succession of ministers served the church right up to the 1980's.

From around the mid 1980's the church was led by a 'Leadership Team'. At around the same time, the church saw some radical changes to the inside of the building. The floor was replaced (the original having started to rot away) and the old pews, (beautifully made but a bit uncormfortable!) were replaced by modern comfortable seating.

The church provides a welcoming and comfortable environment. With its flexible seating arrangements we can accomodate up to 90 people for weddings, concerts, funerals etc. The natural acoustics of the building make it ideal for music exams - the church is regularly used by Trinity Music College of London for regional music exams.

An emphasis on children's work, started back in the late 1800's, continues to this day. During the early part of the last century, the Sunday School attracted up to 70 children on a Sunday and a young peoples group (Christian Endeavour) catered for the teenagers and young adults. (Many of those who attended the Sunday School and Christian Endeavour groups many years ago, now attend the church with their own children!) We continue to offer a safe and secure environment for children from 1 to 11. We have a parent organised creche facility for the very young children and Sunday Club for children aged 3 -11. Our Sunday Club leaders have been CRB checked in line with our 'Safe To Grow' policy. (Parents are always welcome to accompany their children if they wish.) 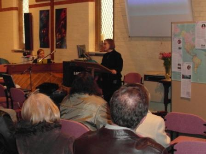 Today, the church continues to serve the village and the surrounding area. We have a core membership of around 30, but with between 35-40 joining us for our main service at 10.30am on a Sunday morning. We have strong links with the village primary school and other organisations within the village as well as the Parish Church of St Nicholas. Our congregation ranges in age from 3 to 93!

As part of our commitment to comply with legislation governing wheelchair access, we now have a ramp which can be fitted to the front of the main entrance.

Why not explore the rest of our web-site and discover that there is more to Radford Semele Baptist Church than meets the eye!

The following is a transcript of a document written by Mr John Hemmings of Radford Semele. Mr Hemmings was involved in the establishment of the Baptist Chapel in the village. He was born in 1860 son of Richard and Ann Hemmings in Radford. He married in 1883 and died in 1927. Many years after his death he had a Road named after him (Hemmings Close) on the old Coventry Radiator site. (courtesy of Mr Roger Cleal - Great Grandson of John Hemmings)

Remembrances of the Baptist Cause in Radford Semele

I remember when the services were conducted in a small cottage and a very small one too a Thatched one and the room was well filled with Earnest Worshipers. At that time the Principals and Organisers were Mr& MrsStoney & who resided at Radford and who were looked up to as Leaders of the Cause: They were very devout Persons who strain hard for the Cause of Christ and I remember though only a boy, the Bright Singing, and the earnest Preaching. Although my Mother and Father belonged to The Church of England, My mother would often take me there and when the hymns were being sung she would as was the used to in those days stand me up on the seat and as far as I can remember that cottage was used only for worship. How long it was used before I remember I cannot say.

The cottage was next to the Poplars and was used for services for 7 or 8 years from in 1873.

Mr Thorne of Leamington who was interested in the work and who was an earnest Christian and worker he bought the house and grounds of the old public house, the sign of the Crown Inn and the cottage adjoining was part of the land. He had the chapel built the Foundation Stone was laid by himself in April 1874. The cottage adjoining the public house was used for services while the chapel was in building overlooking the fact that Thomas Henry Thorne acting as Chairman for some years before namely from 1866.

The Contractor of the building being Gasconge of Leamington the cost of it’s construction being £1,500 All the woodwork seats and tables being of solid oak of the best workmanship throughout. Mr T. H. Thorne retired from the pastorship in 1882 The Rev. James Butler was appointed to succeed Mr Thorne as Pastor for about 7 years. Mr T.H. Joyce was then appointed lay pastor and continued until October 1910. When he passed to his rest but during his Pastorate he and Mr J. Humbly of Leamington organised a Sunday school in the year 1892. Mr J. Hemming’s duly appointed Co. worker in connection with the school Also Miss A. Joyce the school in a short time had over 80 members. The school was conducted in the Chapel and in the vestry until 1898. When Mr J. Hemmings was instrumental in securing The Long Room, known as the Mission Room for the purpose of a Sunday School from the late Mrs L. Robinson of The Poplars, Radford Semele. The room then stood on the grounds at The Poplars. She Mrs L. Robinson being at most of the expense of its construction there and on that Christian worker having the villager to reside at Coleshill House, Leam Terrace, Leamington Spa arrangements were made the said lady and her two daughters Mrs L. Staite & Mrs. B. Eynor to present the room to the chapel to be used for a Sunday School and Religious Meetings. Mr. J. Hemmings who was the instrument working in connection of the removal of the room on to the Chapel grounds. 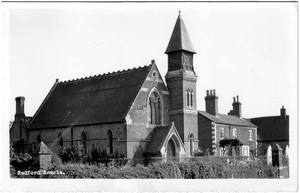 Mr A. Bond, Builder and Constructor of Leamington undertook the work for the removal of the room to where it now stands the cost being £50 & 6s. The school room was opened for divine service on the 7th day of February 1899 the Rev. F. Johnson Pastor of Clarendon Street Baptist church, Leamington took the chair. Those who were also present Mrs L. Robinson, Mrs Joyce, Mrs A. Baird short addresses were given by each of them. The school room has been opened four times as a reading room and had to be closed for most of membership. The late L. H. Joyce continued on as Lay Pastor until he passed away to his well earned rest after his long and faithful service on October 4th 1910

Mr U. Peau and W. Young acted as stewards of the church for many years. Mrs J. Hemmings was also added to their number as stewards. Being baptised Mr J. and his wife on Sunday evening 28th August 1892 by the Rev. G.A. Wills of Clarendon Baptist Church.

Appointed Deacon September 11th of the same year also Mr E. Norton. Mr. F. Snape of Leamington was appointed as Lay Pastor on January 12th 1911 but only till about 1913.

Mr J. Neale was then appointed Lay Pastor and commenced his duties on 10th of August 1913 and who is still in office.

P.S. I might as well add that during Mr J. H. Joyce Pastorate there were three Baptismal Services.

On the first occasion two were baptised.

On the second occasion there were seven baptised.

On the third occasion there were two. 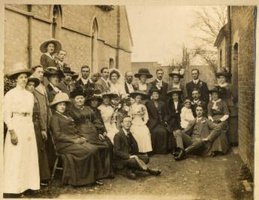